Goa is a famous beach destination. But it also has beautiful breathtaking fields and hinterlands. This article is about rice farming which is the staple food of Goa and the life of a farmer. Growing rice involves lot of hardship, patience and its success depends a lot on the weather.

Sadly, fewer people are continuing with tradition as it is not very remunerative. However, there is light at the end of tunnel and it is heartening to see a lot of Goan engineers and other blue collared job holders turning into farmers. Slowly, it would seem that the world is reversing back to good old practices.

There are two popular varieties of rice grown namely Jyoti and Jaya. Jyoti is grown only from June to September (during monsoon) and Jaya in winters (grown next to water bodies). This rice is then boiled and dried.  This variety referred to as ‘boiled rice’ is consumed by most Goans. There is also local brown rice, which is unpolished or processed (parboiled) and is supposed to be very healthy.

Going back to olden times, every household in Goa practiced farming with each one owing fields and cattle.  The head of the family would impart the knowledge and the same was passed on to the heirs and successive generations.  While many of the traditional practices are still being followed, some mechanisation has been introduced in recent years. 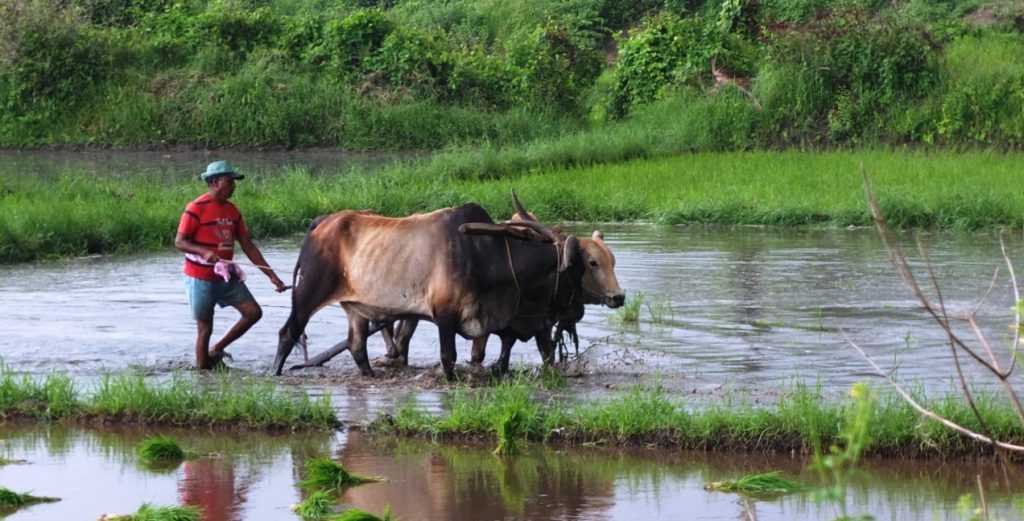 Come May, the fields are first ploughed to soften the mud, make beds, mud partitions and remove the weeds. These are the first steps to prepare the paddy field. Usually two bullocks are tied to a steel plough (nagor in Konkani). While they pull the yoke, the farmer urges them on in the right direction using specific language. The bullocks are treated as pets and often have names too (based on days of the week, or so like Mangal, Guru, etc). During the dry season, cattle need to graze and are often taken to hill sides or unused fields for the same.

After enriching the soil with manure, the farmer spreads sprouted seeds (Rou) uniformly in a fenced nursery with beds of rectangular sizes. The seeds need to be protected from birds and other creatures for a week or two (then someone or the other stays there whole day carrying a metal box with stick to make sound!!!), till it takes root and plants sprout. From dawn to dusk, the farmer is witnessed in the fields, taking care of tiny patch of green in his vast spread land. With ample amount of rains, the crop grows thick and long in about 3 weeks. If rains are more which floods the fields, then small water channels are made so excess water flows.

In 21-22 days, the process of transplanting takes place. Here the crop is uprooted and replanted in bunches of 2-3 saplings leaving space of 4-5 inches in between each other. Uniformly planted seeds give better yield than the ones planted randomly as our friend Pantaleao Fernandes, who has written many nice books on attractions and traditions of Goa. Mainly groups of ladies do this job and it’s quite a beautiful sight to behold.

After this, the farmer gets some relief and the rain does its job of raising the crops. In between weeding is done so that the crop can grow with full force and can extract all nutrition from ground. By end August, flowers and panicle form, which turn golden when mature. The field indeed looks like a gold mine! By end September the crop is ready to be harvested and farmers keep praying that no rains come once its ready, as that spoils the standing crop.

There is a beautiful thing about farming which many Indian movies depict especially that of a farmer’s wife carrying an earthen pot filled with food on her head and serving hot meal to her hard working man. After doing such hard work, one can just relish the food as it tastes much better when hungry and even more so when one is enjoying it amidst nature.

Tip for Next Trip: If you plan in advance, we can organise for you to be a part of this beautiful event work shoulders to shoulders with locals! In fact rice is grown twice a year in Goa – once in June and second time in November or so (second time is at far fewer places)

Usually all handmade and natural products are used in the fields (no plastic or aluminium) and most of these are woven out of bamboo:

PS: There is a beautiful documentary in Konkani language called Saxtticho Koddo (2017) made by a prominent Goan Vince Costa hailing from beautifully green Curtorim village, the region is also considered “The Rice Bowl of Goa”. Find more about this on following links: Prutha Goa & Scroll.In

Prashant volunteered by getting his hands & feet into mud during transplantation process. As a reward he got free mud therapy with icing on the cake being a refreshing fresh water dip at the end

Walking in typical style with Panttem on head