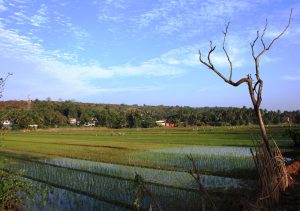 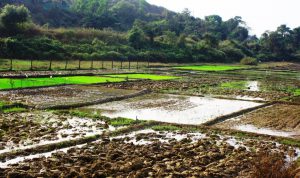 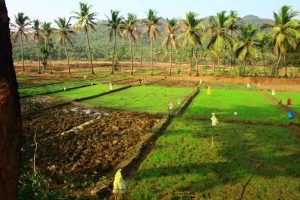 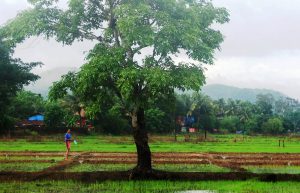 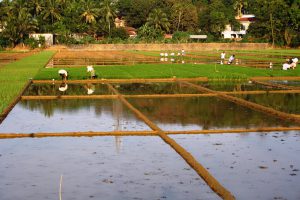 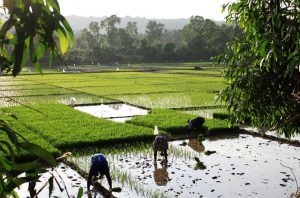 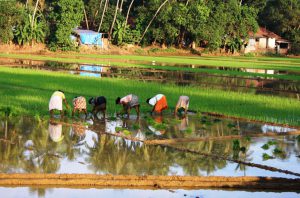 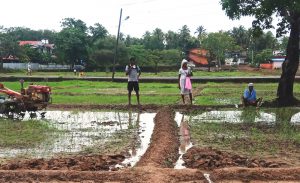 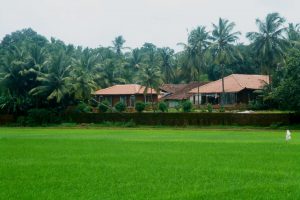 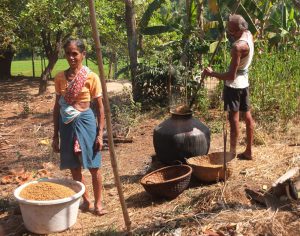 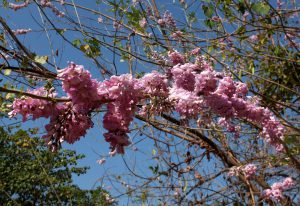 Today I had the opportunity to visit rice fields at Aquem Baixo and Paroda area, where the transplantation job is in progress – thanks to Astrida for timely idea!!

For a change I skipped my morning exercise and left around 8.45 am to explore the places. It was drizzling slightly when I left but then it stopped completely, though remained cloudy and nice!

Such a divine feeling to be there – like in heaven, started clicking people in action from where I entered walking, parked scooter on the road. Saw one guy in action repairing his big machine and all others were occupied in their respective jobs.

Kept the best part for last, where Astrida used to shoo the birds away, left my slippers on the road and started treading through the field / made my way to the same patch, where I could see all paddy sapling grown up in two weeks time….so lush!! Her folks hard work paid….noticed a gentleman doing work with long fawda (spade)! Upon giving closer look, realised he is her dad, wow! What a pleasure to see him smile at me!

Requested him to allow me do some work and he obliged me to use fawda, so this made up for me skipping my work out of the day, by loosening the mud at the side of mer (elevated pathway between plots). As by next weekend, they will use tilling machine to do the same to rest of field (as we did only at border areas, where machine will not do it without damaging the mer). The Monday after next Sunday (6 Jul) which will be about 22 days from the day of sowing seeds, its planned to replant the saplings from nursery to field. While doing so, realised her mother removing weeds a bit far away from us!

One is lucky to be born in the farmer’s family and what an opportunity for me to find them one by one in action! Later the lady came near us and started clearing weeds from other plots too, I too did my bit. In a delightful move, gentleman started striking more conversation with me, which was amusing, with questions like, where I am from; how many children I have, etc! My bad Konkani must have amused them too. In fact she did mention, it would be so much nicer if I could speak the language fluently…..and I know for sure, its going from bad to worse actually. She asked me if I had tea, to which I said no, but would leave soon as was supposed to go to Paroda too to see more of such activities. Then the gentleman ushered me to the stream and fished out a small snail and said its a local delicacy! I said I don’t eat but my ghorkani (wife) does at which he really laughed loud! I also disclosed him that I like snakes and catch them by hand too sometimes.

We also spoke about rains being so less this time. In fact in the other fields, they were using diesel operated pumps for filling it (from nearby stream) to desired level. 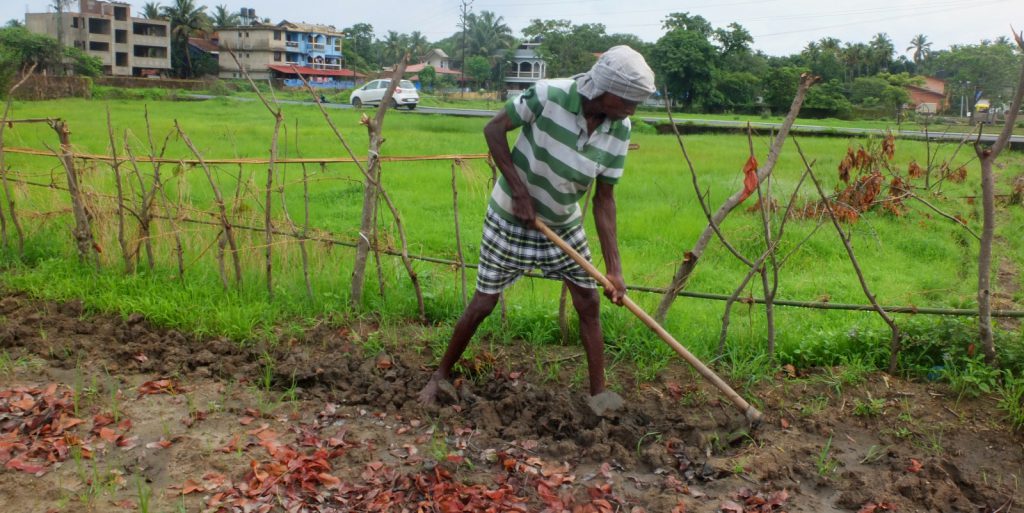 I was particularly impressed by the devotion and integrity they do their daily chores with such great coordination. She too utilises her day so well, keeping herself busy all days, helping her other friend in field, doing work in own field and innumerable jobs at home!  Hats off to them!

I noticed he is thin, but is very strong built with clearly chiselled / carved out muscles in his arms and legs! And so is your mom, real daughter of tamdi mati (red soil) of Goa!! And the posture that they maintain while working, is remarkably scientific and right for body! The age old tradition of clothing oneself properly while doing field work is also impressive.

Just imagine, with the changing times, when farming is an ignored profession, while it should be everyone’s business, how the future will be with less and less people being passed on age old wisdom….farms being converted into commercial land or residential projects, roads being widened, trees being cut mercilessly and plastic & other garbage all around…..yet we do have hope, as we see many professionals from other stream getting back to farming, as per our other blog!!

After feeling enriched with their conversation, I thankfully said bye and started walking to the road. Passed through same first lot of people again, who I had disclosed actually that I was clicking the photo for uploading on website to showcase rice cultivation in Goa, I rode my scooter to Paroda!

Paroda region is one of the most beautiful places in Goa, with many rice patches on either side of road. Similar work in the fields was in full swing at many places and what a beautiful sight to behold

Clicked several more photos, though camera did not cooperate well. Took right turn towards the Paroda parvat (hill) and it reminded me of my past several visits to this region that truly looks a slice of paradise especially in rains! Saw military guys in full gear with machine gun, etc marching in unison on either side of main road!

All in all, it was a great way to start my morning, very refreshing and also an eye opener! The local people doing traditional works is the very essence of any land and must be preserved and protected for eternity! And farming must be everyone’s business in whatever small way one can! Not only a handful of villagers be burdened with feeding entire planet!